This guide to the 10 best hotels to stay in Prague’s City Center will list a few places you can consider for your upcoming Prague vacation. Prague is filled with historical structures and parks built during every major age in architecture, from the Romanesque to the Baroque eras. What remains of the former Bohemian kingdom’s capital can give you enough sights to explore.

However, there are more delights that await Prague city center visitors. Read on to discover the 8 best hotels you can find there.

Among Prague’s listed historical buildings, Hotel Salvator is a three-star, five-story hotel along Truhlarska Street in Old Town. It has over 30 rooms with private baths and eight suites. Its La Boca Restaurant offers a buffet breakfast and has a jazz club and billiard lounge.

Built in 1935, Mosaic House was a bustling hostel before reopening as a four-star design hotel in 2020. It features more than 90 rooms, including two penthouses with garden terraces. It also has a cafe, library, private spa, private sauna, and massage parlor. The sculptures of local artist Michal Trpak—illuminated giant mushrooms as well as a man and a woman hanging from open umbrellas—welcome guests.

Mosaic House is a four-minute walk from the Narodni Trida Metro Station and about 1.3 kilometers away from Charles Bridge.

Icon Hotel and Lounge is housed in a building owned by the Orthodox Church of Czechoslovakia along a quiet street that’s a block away from Wenceslas Square. This four-star, four-story hotel features a mix of functionalist and funky furnishings, including handcrafted beds from the oldest bedmaker in the world—the Sweden-based Hastens—for its 31 bedrooms.

The Icon Hotel is a 15-minute walk from Old Town Square.

The four-star Majestic Plaza Hotel Prague consists of two historical buildings in New Town. The 1880s structure along Školská Street, where Czech writer Jaroslav Hašek was born, features 50 Biedermeier-style rooms. Meanwhile, the other building on Štěpánská Street has more than 130 Art Deco rooms. The Panorama Club rooms on the top-most floor of the seven-story Štěpánská building have verandas overlooking Prague Castle. The hotel has two restaurants and two clubs.

Majestic Plaza is five minutes away from Wenceslas Square. It’s a 20-minute walk from the Prague main train station and Old Town Square.

Hotel Pod Vezi is found in Lesser Town’s Mostecká Street, which is surrounded by Renaissance and Baroque buildings. Its name means “under the tower”, as it’s found behind Lesser Town Bridge Tower. Guests get a complimentary ticket to tour this 43.5-meter-high tower.

Like Majestic Plaza, Pod Vezi is a four-star hotel with two interconnected buildings. It has 28 rooms and a rooftop terrace, where you can enjoy a good view of Mala Strana and the rooftops of St. Nicholas Church and St. Vitus Cathedral. The hotel is just 500 meters away from the Malostranska metro station.

Get closer to Prague Castle by booking a stay at Design Hotel Neruda along the cobbled Nerudova Street, also in Lesser Town. It’s named after the nation’s 19th-century literary icon Jan Neruda, who lived in the Baroque-style “House of Two Suns” in the upper part of the street.

Czech architect Bořek Šípek and designer Barbora Škorpilová gave a modern-classicist touch to this former 14th-century convent, which has 42 rooms. After a busy day, you can have a light meal or snack at the hotel’s Prague Chocolate Cafe and Bistro. Or you can head for the Relaxing Zone to get a massage or body treatment.

Prague Castle is a 300-meter uphill walk from the hotel. You can also reach Charles Bridge on foot in about 15 minutes.

Housed in a building erected in the 1920s, Maximilian Hotel is a 71-room boutique hotel found in the peaceful Haštalská street of the Old Town’s Jewish Quarter. You can view the Gothic Church of St. Castulus from its deluxe room balconies and suite windows.

The hotel has two in-house dining areas—the Brasserie Maximilian restaurant and Bar Maximilian. Guests also have access to the rooftop gym facilities of its sister property, Hotel Josef, which is a two-minute walk away. After a busy day touring, you can visit Planet Zen Spa for a massage, facial, or spa treatment. Or you can stroll along the nearby upscale Pařížská shopping street.

Golden Well Hotel in Lesser Town, built in 1552, was previously owned by Habsburg Emperor Rudolf II and was the home of Danish astronomer Tycho de Brahe, who served the monarch’s imperial court toward the end of his life. It’s no surprise that the hotel’s two suites are named after them. The Renaissance-style building with art deco furnishings and wood-paneled interiors has 17 other rooms. All windows offer views of the Royal Garden of Prague Castle.

The Iron Gate Hotel and Suites earned the title UNESCO-protected building, as it has managed to survive amid the change of hands since it was built in the late 1300s. It has 52 rooms and suites, all of which feature super king-sized beds, spacious sitting areas, and preserved hand-painted wooden ceilings that date as far back as the 14th century. Its Deer Restaurant specializes in venison and international dishes.

The hotel is a two-minute walk from Old Town Square and a four-minute walk away from the Můstek Metro station.

The five-star Augustine Hotel in Lesser Town is a complex of seven cubism-inspired buildings. One of them is the still-functioning St. Thomas Monastery, which was built by the Augustinians in the 13th century. The hotel has more than 100 contemporary luxury units, including four signature suites.

Located along Letenska Street, Augustine Hotel is a short distance from the Wallenstein Palace and Gardens and St. Thomas Church. Meanwhile, Prague Castle and Charles Bridge are a five-minute walk from the hotel.

Look First Before You Book

Ease your travel planning by familiarizing yourself with the different areas that make up Prague’s city center. This way, you can find the best hotels to stay in Prague city center that will be close to your favorite destinations. See you there! Most romantic hotels & apartments in Prague 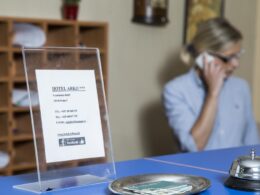 Hotel Arko in Prague: For a peaceful and restful day in Prague 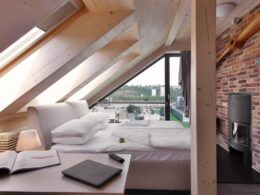 Experience the Prague hospitality at the Absolutum Wellness Hotel 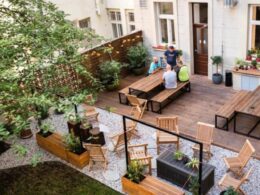 DREAM Hostel in Prague: A family-friendly hostel at  Prague’s heart